Welcome to twinkie tush! If you are new, please read this first! :)
And click here for the twinkie tush online shop!

Written by Mike in late 2010, when twinkie tush was in its earliest stages of development.  He had no idea what the choice to begin cloth diapering would eventually lead to for his family. <3


"I know what you’re all thinking. Cloth Diapers?? Not for my kid. No thanks. Well before you shut the door completely on the idea, you should know that I felt exactly the same way. Possibly even a bit more passionate and politically incorrect about the idea of cloth diapers than you when Gretchen first brought the idea to me more than a year and a half ago now when the twinkies were newborns. All I could see in my head were dirty white washcloths and big pins lying around everywhere. Piles of stinking cloths filling laundry baskets with random stains and droppings leading the way to the basement. Add to that the number of times I would stick myself (or even worse my child) with an oversized safety pin, and I didn’t even want to hear another word on cloth diapers. I mean I was having enough trouble getting them to stay still long enough to affix that handy sticky tab. Introduce potential deadly weapons to the mix?? That’s a negative ghost rider.

At first, my request was granted, at least momentarily - Gretchen agreed to drop the idea of cloth diapers. It seemed my ignorant rant worked and I could return to the world of buying Pampers every week, dealing with blow outs, and stuffing as many soiled diapers as I could into that weird white tower looking thing in the corner of the nursery. The weird white tower looking thing had a smell all to itself, but hey that’s that normal stink normal families deem acceptable, right? No worries there.

Then Gretchen started to do even more research on CDs (that’s cloth diapers for all you dads out there, not compact discs like I once thought). I could hear her saying things like, “Oh wow these are so different than we were thinking” and “That is the cutest thing I’ve ever seen!”. I started to see the signs of another conversation heading my way. I did my best to stifle her excitement, but the more she read the more I knew my tactic of shaming the cloth diaper world would no longer work. I avoided looking at pictures, didn’t listen to mom testimonials, and did all I could to instill a full out moratorium on CD talk – all to no avail. I was shown pictures of (yes, I admit it) very cute patterns. It was brought to my attention that pins weren’t needed. Some had snaps, some had Velcro. Of course they did.

Finally, I pulled out the big guns. Money. This new world of diapers wasn’t as affordable as the old white cloth with big pins were. And as a new dad of twins, I certainly wasn’t about to spend MORE on diapers just because they were cute and eco friendly. So I laid it out there. “I need to see a cost comparison. Show me dollar for dollar how these will save us more money. And include everything  - don’t forget water consumption for all the washing that will be required.” No further conversations would be had until that analysis was completed. As a new mom of twins, I was fairly certain Gretchen wouldn’t have that to me for at least a month if ever with the level of detail I wanted to see.  2 days later, I received an organized, clearly labeled spreadsheet comparing the costs of CD’s to the cost of “sposies”. And she was right – CD’s would save us a ton of money in the long run. “Ok, I see it saves us money in the long run, but it’s a huge upfront cost to get this going”, I countered with. She was prepared for that as well, informing me that she had discussions with both sets of Grandparents and secured contributions to offset the cost. “They were always buying us disposables so I just asked them for a larger one time gift” – my wife is a genius.

So, there it was – all my arguments and objections had been defeated. In a last attempt to save my foolish male pride, I made 3 demands before I would sign on to this cloth diaper train:

1. When going out for longer than 2 hours (and definitely on vacations), disposables had to be used - Couldn’t fathom the idea of carrying around dirty diapers.

2. I would not have to be responsible for any laundry specific to the diapers – Just seemed like the lazy caveman thing to say.

3. I would never scrape anything off a diaper or deal with large amounts of poop once the baby was cleaned and changed – The thought of scraping poop off a diaper is not for me.

Gretch agreed and we hopped on the train. And I’m ever grateful for her dedication to the CD cause. The babies seem much happier in them, blowouts ceased entirely, and we are saving money while helping the environment.  Shortly after starting CDing we began to use cloth napkins in our house which blows my mind every day. Our home has become greener in so many ways in the past couple years.  And on the extremely rare occasion we do need to use a disposable I’m shocked I ever thought they were better. They really feel like rough, cheap paper in my hands. And I now find it harder to put those on vs. a cloth diaper.

As for my 3 demands, we pretty much use CD’s all the time – traveling or not. There are very smart ways to deal with carrying dirty diapers, wouldn’t ya know? While Gretchen does the majority of the laundry, I do what I can to help out. Just had to learn what the heck an extra rinse cycle was and remember to take out the pail liner before running it.  I still haven’t scraped a poopy diaper, but Gretchen is going on a 3 day road trip in March so I just may have to. Maybe."
Posted by Gretchen at 8:30 PM 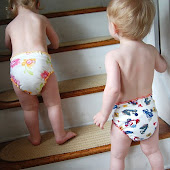 Gretchen
My name is Gretchen Gilpin and I am the creator, owner and chief operator of twinkie tush cloth diapers! My husband Mike and I work together to run twinkie tush, along with a growing team of employees! twinkie tush was named after our now almost 6 year old twins, M&D!